Why would US Senator Paul Rand want to repeal the Espionage Act? 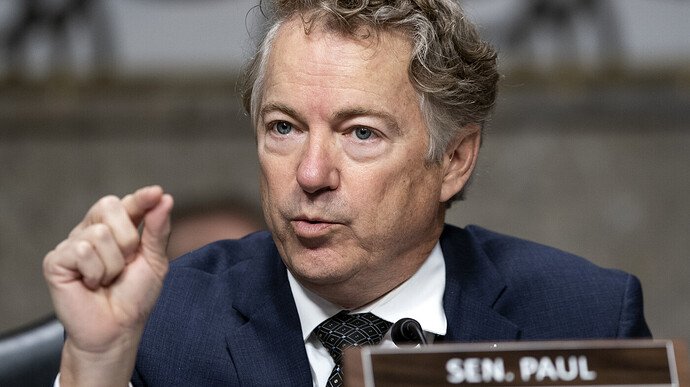 Sen. Rand Paul wants to repeal the Espionage Act amid the Mar-a-Lago...

This is the first time in U.S. history a former president has been investigated for possibly violating the 1917 law. But it's not the first time the Espionage Act has been under scrutiny, experts say.

Sen. Rand Paul wants to repeal the Espionage Act amid an investigation into Trump>

“The espionage act was abused from the beginning to jail dissenters of WWI. It is long past time to repeal this egregious affront to the 1st Amendment,” Paul wrote.

What the law is and how it holds up today

The Espionage Act was passed in 1917, a few months after the U.S. entered World War I. The original law made it illegal for people to obtain or disclose information relating to national defense that could be used to harm the U.S. or benefit another country.

Why would a proud all American want to repeal, rather than simply update to reflect current realities, the Espionage Act?

Any one have any idea?

On a different, though related note, here’s a blast from the past:

Trump says those who gave info to the whistleblower are like spies, reports say

"The spies and treason, we used to handle it a little differently than we do now," the president said, according to the LA Times.

President Donald Trump ratcheted up his defenses on Thursday, likening those who provided information to the whistleblower to spies, according to reports, and tweeting that “our country is at stake” on the day the complaint against the president was made public.

“THE DEMOCRATS ARE TRYING TO DESTROY THE REPUBLICAN PARTY AND ALL THAT IT STANDS FOR,” Trump tweeted in all caps. “STICK TOGETHER, PLAY THEIR GAME, AND FIGHT HARD REPUBLICANS. OUR COUNTRY IS AT STAKE!”

Trump, according to multiple media outlets, told a private group at a midtown hotel Thursday morning that the people who gave information to the whistleblower were “close to a spy,” and (trump) said the U.S. should “handle” them like it did “in the old days” — a veiled reference to execution.

The New York Times and The Los Angeles Times both reported on the comments.

Soooo, if trump turns out to be selling US secrets to Saudi Arabia, or his pal Putin, or that funny little guy who’s always shooting off his missiles, can we suggest he get hanged on that Capitol Hill gallows

It has happened before:

The president was boasting of the “great intel” he receives when he discussed intelligence provided by a U.S. partner.

I believe there’s a legal term Recidivism that might come into play.

### How Did Jared Kushner Get $2 Billion From the Saudis?
https://www.bloomberg.com › opinion › articles › how-…

Apr 11, 2022 — Yet the Saudis still gave Kushner $2 billion — probably because he represents an insurance policy for them. It’s a wager on retaining future …

Apr 10, 2022 — Six months after leaving the White House, Jared Kushner secured a $2 billioninvestment from a fund led by the Saudi crown prince, a close ally …

That wasn’t just for the trump family good looks, or was it?

Perhaps Mr. Rand doesn’t know that espionage is tantamount to sedition. And we have plenty of that around in his party don’t we?

Does he want to change the laws on sedition as well?

How many people have died in Trump’s name ?

I don’t see Senator Rand come up with a New Act . Put your law-making duty where your mouth is, Senator Rand, or let the DOJ do its duty, before your party defunds the FBI and all law enforcement departments in favor of total anarchy.

It seems it is your precious leader who was engaged in espionage as well as in sedition. Way to go Senator Rand!!!

How many people have died in Trump’s name ?

We can probably start with the guy in DC that killed himself after he didn’t get through the car blockades, and the guy in Cincinnati that was killed after not getting through the security checkpoint.

I don’t see Senator Rand come up with a New Act .

That’s the GOP SOP - just tear it down or obstruct, don’t have any plan to replace or improve. It’s what they tried to do to Obamacare.