Who is the Republican Party? What is the GOP's intentions?

I came across this interesting article, it looks at the devolution of the Republican Party.

The platform boasted proudly of the African-Americans who had been appointed to positions in Eisenhower’s administration, and of ending racial discrimination in federal employment. At no point did the document call for any restrictions on immigration; rather, by contrast, it asked Congress to consider an extension of the 1953 Refugee Act, which brought tens of thousands of war-weary European refugees to American shores. …

In his farewell address on January 17, 1961, he highlighted the rise of what he called a “military-industrial complex” — a war industry that he cautioned could exert “undue influence” on the government.

Richard Nixon is hardly remembered as a progressive, but he was much more aggressive in tackling issues like hunger and environmental protection than the Republicans in power today. …

None of this is to argue that Republicans of the past were progress peaceniks. Eisenhower overthrew the democratically elected government of Iran; Nixon began the drug war and prosecuted an unnecessary war in Cambodia; Ronald Reagan helped dismantle America’s labor movementand bloodied Central America.

But the Republican Party of the past at least showed itself capable of responding to domestic and global issues, offering and implementing successful policies to deal with pressing problems like poverty, environmental degradation, and a refugee crisis.

The Republican Party of the past at least showed itself capable of coherently responding to domestic and global issues. 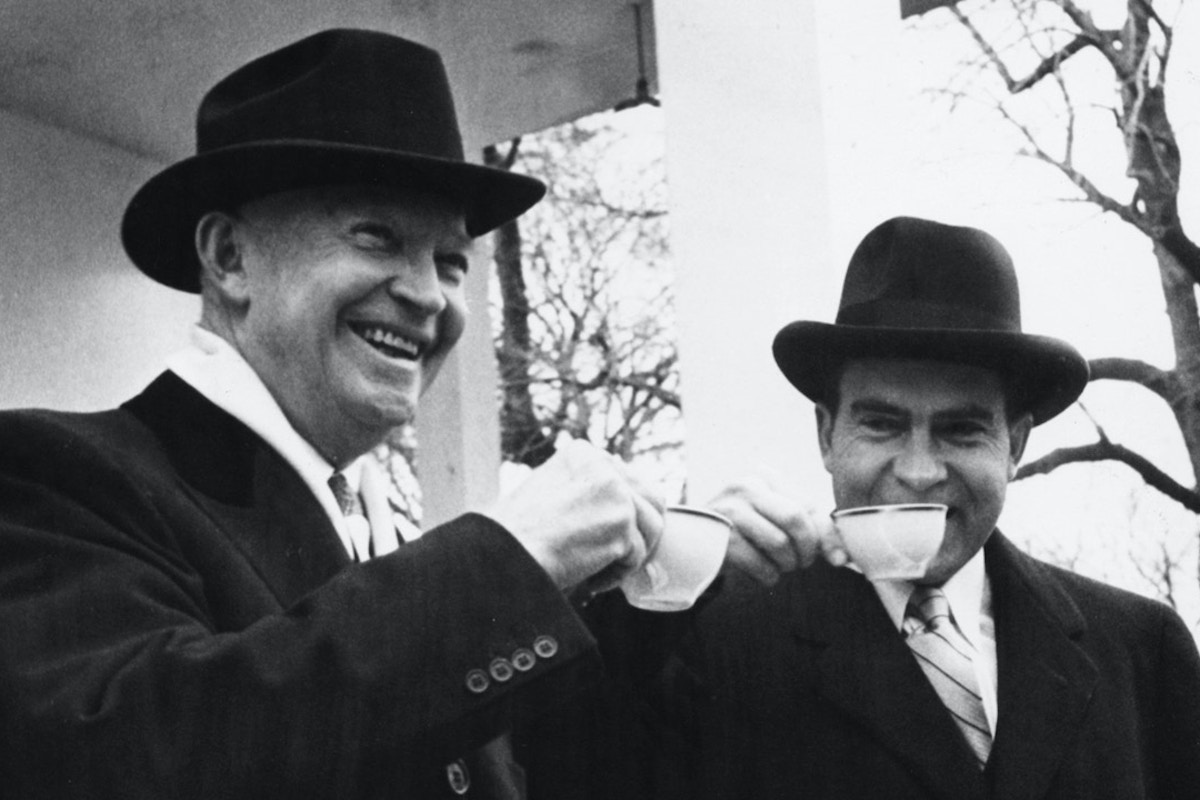 The Long, Sad, Corrupted Devolution of the GOP, From Eisenhower to Donald Trump

The Republican Party of the past at least showed itself capable of coherently responding to domestic and global issues.

Decades later, Eisenhower’s “negligible” oligarchs emerged in the visage of David and Charles Koch, right-wing oil and gas billionaires. The former actually ran for the Libertarian Party’s vice presidential ticket in 1980 on a platform of completely eliminating the Social Security and Medicare programs.

The election in 2012 was America’s most expensive ever, with $6 billion spent in federal elections. The Kochs spent over $400 million backing GOP candidates, more than the top 10 labor unions combined. Casino magnate Sheldon Adelson spent over $100 million during the year, dragging Newt Gingrich and Mitt Romney far to the right.

I see 3 tactics the Q’publicans are taking:

Republicans don’t need to do anything. President joe manchin and Vice President Sinema have pulled Biden pants down

Republicans don’t need to do anything. President joe manchin and Vice President Sinema have pulled Biden pants down

What are you talking about?

I’m not a Boomer. I missed by a year or two depending on what chart you look at, but there probably are some on the forum. BTW, Kamala isn’t much older than I am. She is about two years old, is a young boomer, but she didn’t have anything to do with what happened 60 years ago nor did she destroy anything.

What do you mean by “Better”?
Segregation
Discrimination
Hidden and silenced abuse
Poisonous waterways and burning rivers
A façade of peace and harmony and success for all?

Senseless is as senseless does.

Americans’ unbridled greed and blind self-centeredness and laziness, and the growing disregard for facts and reality, is what’s bringing down America - along with fact free youngsters and lazy whipper snappers who are every bit as guilty as the old dinosaurs who at least used to participate in their government.

Of course the most self absorbed generation in history thinks the problem is the youngsters not believing in 1960s pipe dreams.

You broke them, you buy them.

But you got a point.

Sad part is, it’s today’s crop of kids that are the one’s who are really going to pay the price of our insane disconnect from, and disregard for, our Earth’s biosphere, other creatures, and climate engine.