Just how much have white supremacists infiltrated our military? 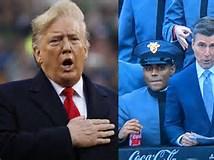 Notice the hand sign, that if held upright, means A-ok. This sign was presented, perhaps surreptitiously, by someone standing behind T rump, who knew that it was being televised. The 3 fingers, form a “W” and the index finger circling to the end of the thumb, forms the circular part of a “P”. 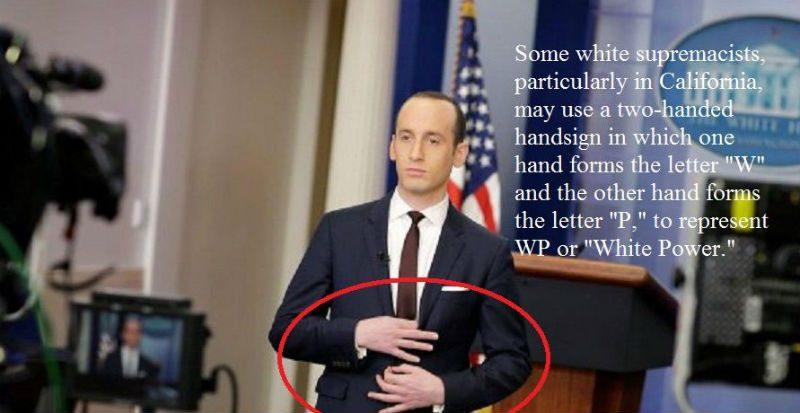 This snakish white supremacist in the White House, Steven Miller, will be proud.

But wtf! If our military is also stacked with white supremacists, we are worse off than I had imagined.

They are everywhere these days. My wife saw a couple of guys where she works silently exchange secret hand signs as they passed each other. They do it slyly, thinking (rightly) that most people won’t notice and (not so right) that those who do will agree with them.

I doubt you would ever see Trump flash one of these signs, though. He seems like one of those people who legitimately thinks that getting rid of all the brown people isn’t racist, it’s just <insert quasi-logical excuse>.

we are worse off than I had imagined.

Hate to say I told you so long ago.

Now what, just keep our heads low until the hammer drops?

CFI showing its age as usual.

The WP symbol is like a 3 year old hoax https://www.adl.org/education/references/hate-symbols/okay-hand-gesture

In 2017, the “okay” hand gesture acquired a new and different significance thanks to a hoax by members of the website 4chan to falsely promote the gesture as a hate symbol, claiming that the gesture represented the letters “wp,” for “white power.” The “okay” gesture hoax was merely the latest in a series of similar 4chan hoaxes using various innocuous symbols; in each case, the hoaxers hoped that the media and liberals would overreact by condemning a common image as white supremacist. In the case of the “okay” gesture, the hoax was so successful the symbol became a popular trolling tactic on the part of right-leaning individuals, who would often post photos to social media of themselves posing while making the “okay” gesture.

By 2019, at least some white supremacists seem to have abandoned the ironic or satiric intent behind the original trolling campaign and used the symbol as a sincere expression of white supremacy, such as when Australian white supremacist Brenton Tarrant flashed the symbol during a March 2019 courtroom appearance soon after his arrest for allegedly murdering 50 people in a shooting spree at mosques in Christchurch, New Zealand.

Oneguy, So if u r correct, then the cadets at the Army/Navy game, were just trolling everyone else? Hmm, I wonder who would do that. Maybe someone with white supremacist tendencies?

I think I have seen T rump flash that sign before, but he goes thru so many odd hand gestures while speaking that I don’t know if he did it consciously, or just as one of his repertoire of speaking hand gestures.

Oneguy, So if u r correct, then the cadets at the Army/Navy game, were just trolling everyone else? Hmm, I wonder who would do that. Maybe someone with white supremacist tendencies?

Or people who are shit-stirrers.

White supremacy is a particular political idea that I don’t recall encountering, but I guess casual racism was pretty common.

FWIW there weren’t many blacks around, it was majority white and then hispanics were the second largest group.

So, sounds like you are saying that the military is rife with shit-stirrers and casual racists. But not with openly-white-power-advocating, swastika-flouting white boys.

Perhaps T rump will pardon any of the shit-stirrers, from the Army/Navy game, if they happen to have some disciplinary actions assigned to them. (If you happen to be a Special Forces hero, you can actually, get away with pissing on a dead enemy.)

So, sounds like you are saying that the military is rife with shit-stirrers and casual racists. But not with openly-white-power-advocating, swastika-flouting white boys.

Perhaps T rump will pardon any of the shit-stirrers, from the Army/Navy game, if they happen to have some disciplinary actions assigned to them. (If you happen to be a Special Forces hero, you can actually, get away with pissing on a dead enemy.)

Nah, the military is good at weeding out most of the shit-stirrers. Those guys are just cadets though, which means they’re maybe half a step above ROTC in military bearing.

Service academies don’t get much respect from most of the military.

The investigation has been announced to have been completed. They found that the cadets were just playing the “circle game”. What is that?, you might ask. It is a game, preferably conducted in inappropriate settings, wherein, one participant makes a circle with thumb and forefinger then hold it below their waist. If another participant sees it, then the signer gets to punch him in the shoulder.

So it is just a coincidence that they furtively make the “white power” sign when playing that game.

That would be a more convincing story had we seen some cadets also getting punched in the shoulder by signers at the Army-Navy game. Hey but maybe there is video of that. The military investigation would not gloss over a story that adversely effected the military’s reputation, would it?

Thanks Oneguy. You know I love seeing pictures of AOC.

BTW, the sign that AOC is flashing, is the far left’s secret sign for “T rump is an A-Hole”.

But seriously, I don’t think the question of the presence of white supremacists and alt-right activists in the military is a settled.

“A recent survey conducted by Military Times reported that 22 percent of service personnel had seen signs of white nationalism or racist ideology within the armed forces. This was the same as the results from a similar survey conducted in the aftermath of the 2017 clash between white supremacists and counter protesters in Charlottesville, Virginia.”

and “… experts point out that the military has no internal law enforcement task force monitoring extremist networks or generating comprehensive data. There is also limited sharing of intelligence on such groups across federal agencies. As a result, one former DOD investigator observed, “…every year they get a report based on what they were never looking for.” Another described the U.S. government’s lack of a concerted effort to gather intelligence on extremist groups as a black hole.”