Jane Mayer, looks at the Invention of the Conspiracy Theory on Biden and Ukraine

Okay all you progressives and rationalists and so on . . .

Now what are we gonna do about it?

The Invention of the Conspiracy Theory on Biden and Ukraine

How a conservative dark-money group that targeted Hillary Clinton in 2016 spread the discredited story that may lead to Donald Trump’s impeachment.

Anyone trying to track the Ukrainian conspiracy stories that were eventually embraced by President Trump is likely to get mired in the same echo chamber of right-wing news purveyors that misinformed voters in 2016.

A pivotal source of the allegations against the Bidens, for instance, is the Government Accountability Institute, a Florida-based opposition-research operation that was founded by the former Trump political adviser Stephen Bannon—the same conservative nonprofit that ginned up questionable stories about the Clintons during the last Presidential campaign.

In both instances, much of the coverage of the scandal was kicked off by Peter Schweizer, a longtime conservative political writer who is an editor-at-large at Breitbart News and the president of the Government Accountability Institute.

Since its founding, in 2012, the group has largely been funded with millions of dollars in tax-exempt donations from the family foundation of the New York hedge-fund magnate Robert Mercer, who was a major donor to Trump’s 2016 campaign. In the organization’s most recently available I.R.S. tax filings, for 2017, Mercer’s daughter Rebekah is listed as the board chairman.

What can we do about it? Conservatives and liberals don’t think anything alike. Conservatives tend to not mind lying, cheating and disenfranchising minority voters to win at any cost. Liberals tend to see that behavior as abhorrent. They tend to present facts based in reality (until they do one of their stupid “I’m just like you” interviews, which are always more reality show than reality. I’m talking to you, Warren!).

That I know of there is only really one group of liberals out there with any real energy and they’re a bunch of assholes. That would be Bernie Sanders supporters. They are, by and large, arrogant, pushy and abusive toward even the tiniest bit of dissent or disagreement on any insignificant point and they likely bare a not insignificant portion of the blame for our current president. Some of them stayed home rather than vote for Hillary and many of them convinced other people to vote for Trump with their venomous attitudes. I, myself, would have stayed home election night 2016 if Bernie had been on the ticket just to spite these assholes. I wouldn’t this time around, mind you, but I would be conflicted. I sincerely hope Bernie never becomes president just because I don’t want to validate his supporters. ANYONE but Bernie, the one exception being Trump. Hell, I know a guy who was convinced by a Bernie supporter just a week or two ago to vote for Trump in 2020, and they were friends.

But you’re definitely not going to combat all these fabricated scandals with anything Democrats are doing now. A thousand dollars a month just for being alive? Come on! I may be liberal, but even I have to ask WHY people should get money for nothing and how we’re going to pay for that. I’m all for an absolute right to food, clean water, clothing, housing, heat, electricity and education. The minimum requirements to live a healthy life, yes. Everyone deserves that. But I am not for free money which can be spent on anything from ramen noodles to meth lab equipment.

And Bernie’s message that taxes will go up for the middle class? Yeah, I’m not for that either. When Romney was running for president his tax rate on tens of millions was less than 15% while my rate on tens of thousands was, I believe, 25%. I don’t like that gap as wide as it is. Why would I be okay with my taxes going up when all my life the Romneys of the world have payed a lower rate than me?

The one message I think Democrats might be able to get to resonate with the people is one they talk about, but give no real plans for. That is cleaning up Washington. Get the money out of politics, but don’t stop there. You remember all those politicians talking about how sweet teachers have it because they only work 3/4 of the year but get paid for the whole year? Our Congressional leaders are scheduled for work less than half the days of the year, are not actually required to show up for any of those days, spend much of their time working to get donations or campaigning rather than actually doing their jobs and get paid many times even the best teacher salaries. Here is the 2016 Senate calendar that shows the days they were scheduled for work, many of them half days. 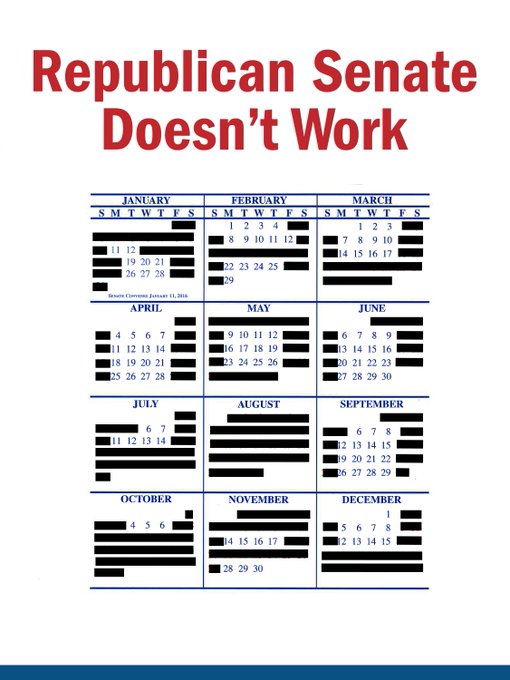 There are 21 entire weeks off there, and that’s during, ironically, the 3/4 of the year they actually “work”. And this is worth nearly $200,000 a year, plus the best medical plan money can buy, plus expenses, plus living allowances, plus a sweet retirement plan, plus staff. And don’t forget, “scheduled to work” doesn’t actually mean “showed up for work” in Washington.

Maybe if Democrats came up with a comprehensive plan to clean up the whole thing people would get behind it. Remember when they were pushing the ACA, Congress didn’t want their insurance to be replaced by it. That said to the people, “This is crap if the people pushing it don’t even want it”. In reality they just have such a sweet insurance package that pretty much nothing would have been as good, but it looked bad. People love a scandal, and Washington is one huge scandal. There are a ton of things just in Washington that Democrats could point at and say, “See where they’re stealing from you? We’re going to put a stop to that!” and the American public would eat it up. IF they actually had a plan and pushed to get it implemented. Democrats only ever want to talk about reality. They don’t just make shit up like Republicans do. So they need to talk about reality. They need to not just say, “We’re going to clean up all the dark money!”, they need to show people what the dark money is and say how they’re going to clean it up. They need simple to understand concepts like the graphic above to show people that they need to be outraged. Trump said he was going to “drain the swamp”. Swamps are bad! I want that! What does that mean, exactly? How will I know if the swamp is actually drained? Hell, I don’t know, but swamps are bad! So show the people “bad”. Show them the real problems that real working class Americans can understand. Here’s a group of people who, just a few years ago, were complaining that the people who teach our children work so little that they aren’t deserving of the pittance they get paid, yet they are not only scheduled for EXACTLY the same percentage of a year of work, they also have about 40% of the SCHEDULED weeks off, were scheduled for only ONE full 5 day week in 2016, get paid SIX DIGITS for doing it and aren’t even required to show up for work to get paid!

If you want the people to care about your party you have to do what the Republicans do. Get them pissed off. If you want to get working class Americans pissed off all you have to do is show them how much their leaders are getting paid and how little they work for it compared to how hard the average American has to work just to scrape by. Show them that their Senators make about as much in 1 year as the average American makes in 4, they only have a 4 day work week and every single day there are a ton of empty seats in the Senate because they don’t even have to show up to work to get paid. That pisses me off. I imagine the guy who is working 50 hour weeks at a labor intensive job and still has to decide each month which bills to pay on time and which bills to let slide would be absolutely furious about that.

But I don’t blame Bernie for his supporters BS. And Yang’s 1k per mo. for all? It won’t happen, it is too new of an idea in our politics, but I don’t think it is such a bad idea. It would, in a straightforward way, change the distribution of wealth, which has, for decades, been distributing wealth to the wealthiest, instead of to all. 12k a yr, sitting in some super-wealthy’s stock portfolio, is little use to anyone. It can make all the difference to those without wealth. But no sense arguing about that currently. It ain’t gonna happen anytime soon.

But you are so right about the lack of effective messaging by liberals.

But you are so right about the lack of effective messaging by liberals.

Worst, they still don't think they even need to.